Harrison had not scored twice in the same game for Leeds in his previous 135 league appearances for the club, but he scored three times in the same afternoon to become their first player to net a league hat-trick against the Hammers since Russell Wainscoat in April 1927.

Harrison put the visitors ahead with a precise finish as Leeds capitalised on their bright start (10) but West Ham levelled through Jarrod Bowen’s ninth goal of the season after he met Aaron Cresswell’s corner to head home (34).

It once more demonstrated the Hammers’ prowess at attacking set-pieces, but they were undone when faced by one themselves just three minutes later as Luke Ayling’s flick-on was nudged over the line by the unmarked Harrison.

David Moyes felt his players lacked energy and looked fatigued in their 3-2 defeat to Leeds and put it down to West Ham playing a midweek match while Leeds did not.

Wasn’t meant to be today! Frustrating the way the game went. We move on to a massive game next weekend. Stay positive⚒️ @WestHam

West Ham again rallied to level a second time seven minutes into the second half through Pablo Fornals’ well-taken strike but Harrison would complete his hat-trick in style, latching onto the impressive Raphinha’s through ball to lift his finish over Lukasz Fabianski (60).

Leeds’ resurgence continues with this rare win in London coming after the 3-1 victory over Burnley as Marcelo Bielsa’s side rise above Everton to 15th in the table, nine points clear of the relegation zone.

Man of the match: Jack Harrison.

Writing in his programme notes, Moyes highlighted how he wasn’t too happy that the Norwich game in midweek had been sandwiched in between these two meetings with Leeds following that FA Cup win over Bielsa’s side, claiming the players “prepared as well as they possibly could” as they dug in and showed resilience to claim three more points.

By the final whistle, Moyes claimed the hectic schedule had caught up with his players. He told Sky Sports: “I have to give credit to our players as to play Leeds one Sunday and then the next Sunday with the Premier League putting a game in between [vs Norwich] it’s really difficult. Leeds didn’t have a game and we did. Is it an excuse? Yeah, a little bit but I think it’s a fair one.

West Ham were unchanged from the side which beat Norwich in midweek for the visit of Leeds. Midfielder Tomas Soucek was absent from the squad again.

Leeds made four changes from the side beaten by West Ham in the cup last week with Pascal Struijk, Stuart Dallas, Adam Forshaw and Raphinha starting.

“When you play Leeds you know the intensity you need to play at – teams are glad to get Leeds out of the way. We played them in the cup last week and got through. We knew we had them in the league too but then the Premier League stuck the game in between. It made it very difficult for us to play with the energy we needed.

“We found it difficult to get prepared quickly but we had to do it. We made the mistakes today, it wasn’t anyone else’s fault but there were other reasons for it too.

“We’ve not been talking about fourth. We’ve been talking about chasing the teams and we’ll keep doing that. The players are making a great go of it but today we were short and didn’t play well enough. But there are some mitigating circumstances for that.”

Here, the Hammers looked somewhat disorganised in the opening period, certainly defensively, as they conceded two avoidable goals with Cresswell at least partially at fault for both.

The left-back hesitated and allowed Raphinha to chase and win a lost cause before setting up Mateusz Klich to force Fabianski to parry the ball into the path of Adam Forshaw, who unselfishly teed up Harrison for a crisp finish. 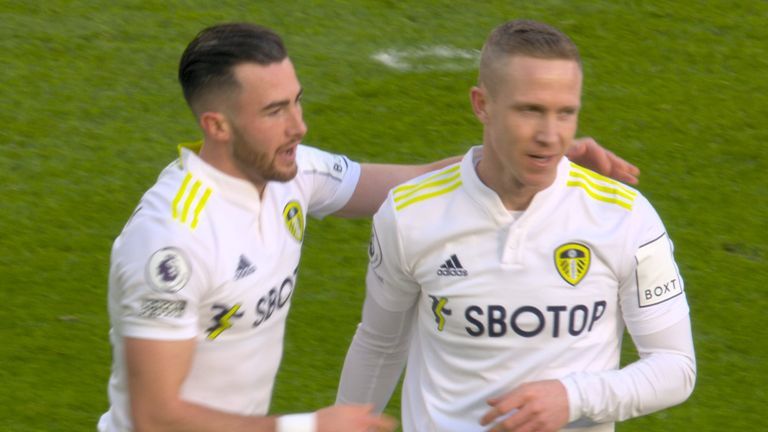 Stuart Dallas made a vital block to deny Michail Antonio before Cresswell would atone for his error to set up Bowen with a trademark set-piece delivery that found the stooping Bowen in between Pascal Struijk and Ayling to head beyond Illan Meslier.

You sensed the hosts would build on Bowen’s equaliser given that Bielsa saw his injury problems mount when both Forshaw and Junior Firpo were forced off with muscular injuries, but Leeds duly restored their lead before the break when Harrison was played onside by Cresswell to direct Ayling’s knockdown into the net from close range.

After the break, Moyes saw his team transformed upon the restart with Fornals hauling his side level for a second time when indecision from Ayling allowed Antonio to prod the ball into the path of the Spaniard to reverse his shot past the wrong-footed Meslier. 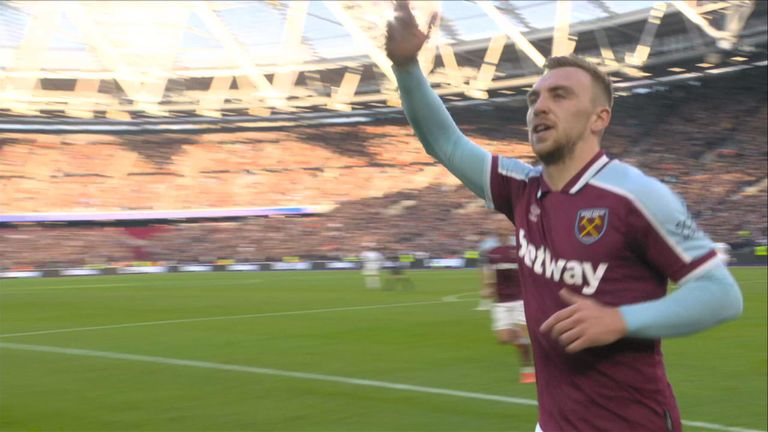 Following Harrison’s third of the afternoon, West Ham were handed a reprieve when referee Mike Dean consulted Craig Pawson to rule out Klich’s strike from Raphinha’s pull back after the ball struck the offside Rodrigo on the goal line.

West Ham thought they had levelled when substitute Andriy Yarmolenko hooked his shot over the line from close range but Bowen was correctly flagged for offside in the build-up following Vladimir Coufal’s shot.

There was still time for Bowen to produce a glaring miss from Antonio’s cross with virtually the final kick of a pulsating contest as he somehow chested over from underneath the crossbar – but it would have been rough justice on Leeds. 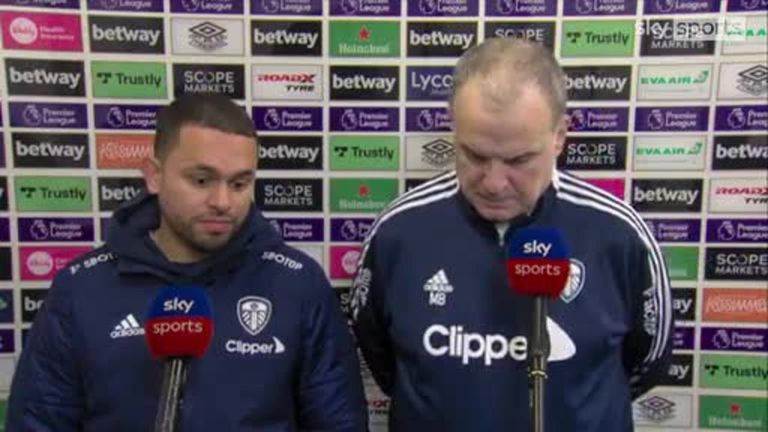 Marcelo Bielsa praised his players for their effort and desire to win as they beat West Ham 3-2 in a thrilling encounter at the London stadium.

“It’s very frustrating” midfielder Declan Rice told Sky Sports. “We weren’t like our usual selves. We started the game poorly. They were right on the front foot. Their goal was a wake up call.

“We are still in the top four at the minute. This was a big chance to close the gap on Chelsea in second, but that is football. It is about how you bounce back.

“We always take it one game at a time. We knew today was massive chance, it is a chance missed. Massive. There were silly mistakes today.” 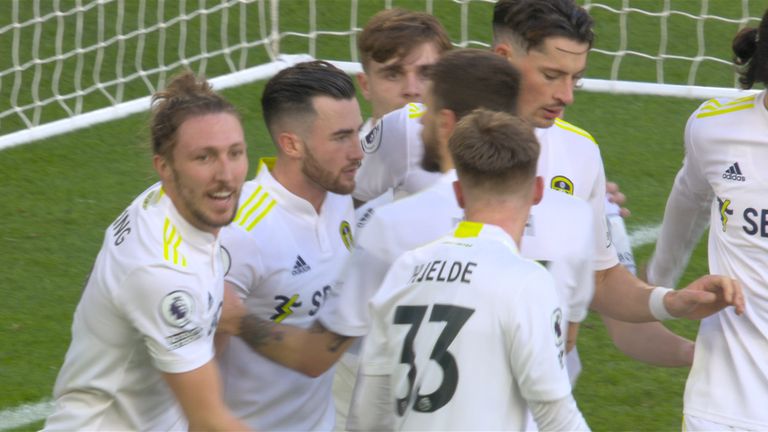 Harrison scores his second for Leeds

Bielsa’s side were boosted by the return of Struijk while Rodrigo was named on the bench but their squad remained threadbare with nine other first-team players ruled out.

It meant 15-year-old Archie Gray was named on the bench for the second time this season – but Leeds rolled up their sleeves and produced a first-half display full of character, typified by Harrison. 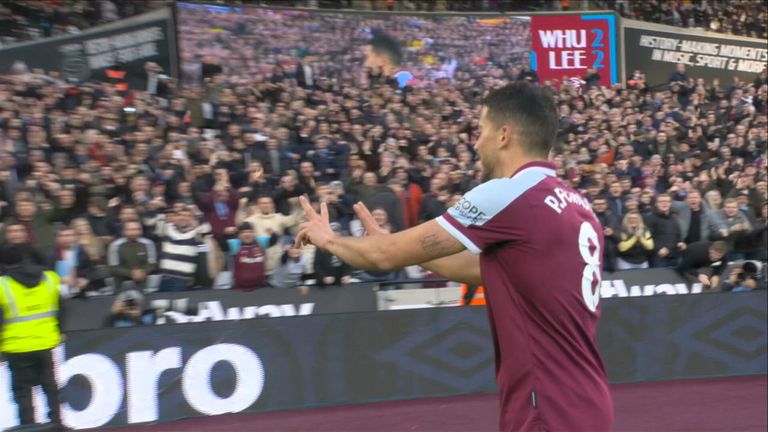 The 25-year-old has been a little slow to get going this term having scored eight league goals last season and only broke his duck this time around in the recent 3-1 win over Burnley, but he has rediscovered his scoring touch.

Leeds could well have extended their lead before the break as Dan James was played through on goal by Raphinha but his shot was straight at Fabianski. And yet, Bielsa would this time not be left to rue missed opportunities.

His side could have buckled after Fornals’ well-taken equaliser, but instead, Leeds wrestled control of this see-saw game once more as Dallas pickpocketed Vlasic to feed Raphinha before his perfectly-weighted pass was expertly finished by Harrison to complete his hat-trick. 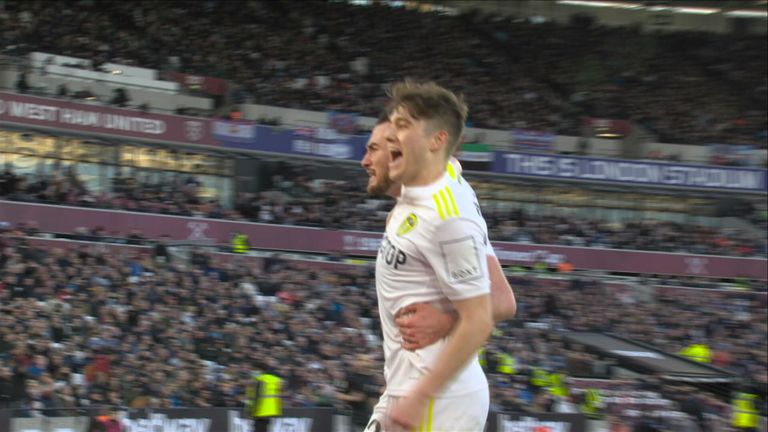 Raphinha came within inches of extending Leeds’ advantage when his sublime free-kick crashed against the post, and while Bielsa did lament Klich’s strike being chalked off by VAR, he would rise from his haunches to celebrate a breath-taking victory come the final whistle.

“It was a typical Premier League game,” Bielsa told Sky Sports. “It was good that it went in our favour but the margin was very close. “It is a triumph for the players because of the effort they put in. The desire to win was very, very big.”

Bowen looked to the heavens at the death, missing when it was easier to score. How costly it could prove to West Ham’s Champions League hopes come May.

Moyes added: “I’m not sure why he went for his chest rather than his head. We shouldn’t have been in that position in the first place, but for lots of different reasons we were.”

Man of the match – Jack Harrison

Only the 2nd player to score a PL hat-trick for @LUFC since 2003 following Patrick Bamford last season pic.twitter.com/6TWZKX3zhM

Harrison told Sky Sports: “I’m delighted to get a hat-trick. It is an amazing feeling to score and when you get three even better. I am just really happy to take part in the win.

“The last week we have been working super hard after the defeat against West Ham in the FA Cup. We wanted to show a different side to us. We were able to control the game a bit and get three points.

“Hopefully we can go on a good run of form between now and the end of the season.”