Nunes defends her title against Julianna Pena in the early hours of Sunday morning and ahead of the clash, UFC light heavyweight Craig praised the champion’s credentials.

“Nunes is one of the greatest female athletes to ever grace any sport,” he told Sky Sports.

“I think she’s an ambassador for the sport.”

Craig believed Nunes would face one of her toughest tests in Megan Anderson at UFC 259 due to the Australian’s height and size advantage but says the first-round submission victory for Nunes was “‘the Lioness’ doing her thing”.

Nunes has not lost since 2014 and is on a 12-fight win streak which includes two victories against current flyweight champion Valentina Shevchenko and emphatic stoppages against former UFC champions Cris Cyborg and Ronda Rousey.

As a result, Craig admitted he cannot see any potential path to victory for Pena on Sunday morning.

“Nunes “beats them [her opponents] at their own game, and I can’t find anybody in any female division beating her,” he said.

“In Nunes, you’ve got somebody who hits hard, somebody who is technically a very good striker and she mixes it up between wrestling and that’s what MMA is – it’s not relying on just one thing.” 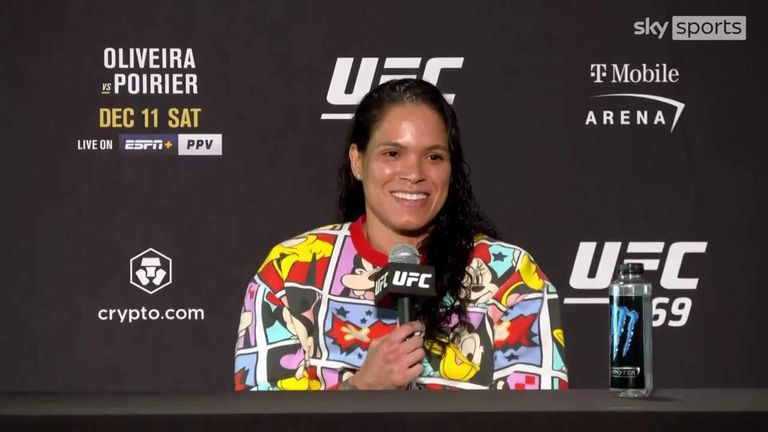 Amanda Nunes fired back at her opponent at UFC 269, calling Julianna Pena ‘delusional’

Though there are skilled competitors within Nunes’ divisions, Craig believes there is a vast gulf in ability between the champion and any would-be challengers, which means Nunes will “reign for a long time until she decides she needs to take a step back”.

Craig suggested the female divisions of the UFC will decline in popularity when this happens “because the belts are going to change hands a lot of times and we’re not going to have that star that we do in Amanda Nunes”.

He also celebrated the fact the sport frequently displays the best fighters competing against each other with only one title to contend for in each weight class: “In the UFC, there’s one belt, and if you want it, you’ve got to chase it.”

Craig predicted a fruitless outing for Pena against Nunes at UFC 269 and thinks the champion will win “by any way she wants”.

“It’s going to be a first-round finish for me.”