Russell Martin says the Welsh Government’s decision to effectively Swansea ban fans from their home games due to rising coronavirus cases has put them at a disadvantage to their English rivals and will damage January transfer plans.

All sporting events in Wales are limited to 50 spectators from Boxing Day due to the surge of the Omicron variant, although supporters are still allowed to travel and attend matches in England.

The different rules mean supporters of Swansea and their Sky Bet Championship neighbours Cardiff, as well as League Two Newport, can attend their club’s away games but not home matches for at least the next three weeks.

Martin, whose side are due to play at Millwall on Boxing Day, said: “We’re at a disadvantage by not having fans at home.

“We’re at a disadvantage financially. It’s affecting us already and it affects January.

“It will take a bit more working out from the people back at the stadium. Once they work all that out, we will pretty much know what we have to work with.

“But the landscape has already changed and I expect it will change again at some point.

“We’ve been told it’s the next three games. After that we don’t know what’s going to happen.”

The same applies for the FA Cup third-round meeting with Southampton on January 8.

Before that, however, Swansea are due to travel up the M4 to visit Millwall on Boxing Day.

“We can’t have fans but they can travel to the away game on Boxing Day.

“The fact we can take supporters to London on Saturday, where I’m pretty sure there’s a lot more cases than there are where we’re based, doesn’t make a huge amount of sense.

“But we have to get on with it and look forward to having our supporters back in whenever we’re told to do so.”

Swansea have reported two positive coronavirus cases ahead of the Millwall game and both players are now isolating.

“No one’s symptomatic,” Martin said. “We started testing every day because we have to.

“We’ve had a couple of positives, but both have been vaccinated.

“We’ll have to see what happens in the upcoming days and weeks, and I’m pretty sure it will affect us at some point.

“Millwall have been hugely affected by it and we’re just hoping they can get everyone back and the game will go ahead.

“We want a game on Boxing Day and the supporters will be travelling there wanting a game as well.” 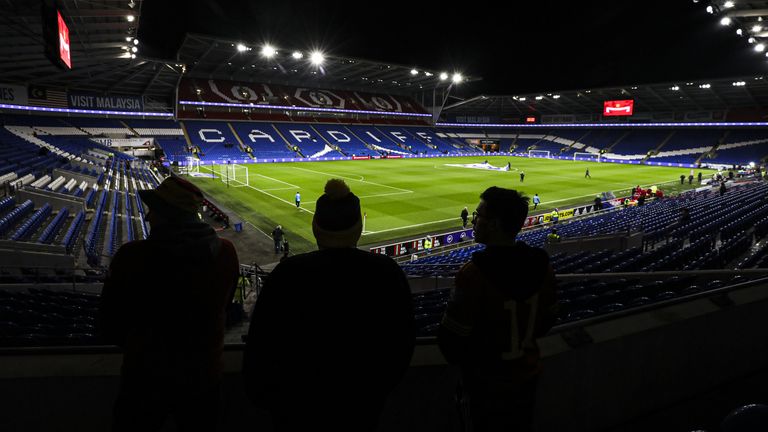 Cardiff’s next home match is against Preston in the FA Cup on January 9 after their Boxing Day match against Coventry was postponed due to positive cases within their squad.

They are due to travel to Bournemouth and West Brom on December 30 and January 2 respectively, where Cardiff fans will be allowed to attend.

Bluebirds manager Steve Morison said: “We’re really frustrated but from our point of view we’ll have to put on a good a show as we can at Bournemouth and West Brom so the fans can go and watch.

“They [the Welsh Government] make their own decisions. You’ve seen Scotland have done something similar. They’re still allowing some fans in.

“Are the other governments going to get up to where Wales are? I don’t know. We have to get on with it unfortunately. It goes all the way down to grassroots so once you start to look properly into it you get more and more frustrated.”

Newport County chairman Gavin Foxall says a £3m Welsh Government support fund for sports clubs in Wales is not enough to cover the loss of revenue from playing games behind closed doors.

The club’s Boxing Day fixture at home to Forest Green Rovers was called off due to Covid cases in the visitors’ squad.

They travel to Leyton Orient and Walsall before back-to-back home fixtures against Salford and Harrogate next month.

“One of the big events in Wales over the festive period is the Welsh Grand National so it will cover that as well.

“We’re not expecting a great deal. Anything we do get will obviously be very welcome but we don’t know exactly how that will work and what that will be. That’s a view that’s widely held within Wales.

“Given the amount of teams there are in rugby and football and when you bring the other sports in as well we don’t think it is going to be enough.

“We will lose revenue over the festive period. We’ve put our bid into the Welsh Government and hopefully we’ll get as much of that back as possible.”