Dunne has been handed an 18-month ban from racing, with three months suspended, after an independent panel found him in breach on all four counts of conduct prejudicial to horseracing, following a hearing in High Holborn, London.

Newmarket-based Kelleway told Sky Sports Racing: “This is 40 years too late, this is what I had to suffer back in the day when I was riding and it has taken quite a few decades for a clearer vision of what lady jockeys go through.

“This is not just Bryony, a lot of lady jockeys kept schtum about a lot of things. I know one particular Flat jockey told me about her experiences, but she was too scared to say anything. At last they’ve heard Bryony and I’m delighted with the verdict.

“I think she can move on from this – look at her, the proof of the pudding is in the eating, going through all this she won the Tingle Creek and she won today, that’s how she does the talking. She’s carried on like a professional, but thank God she had the courage to speak up.”

The culture of the weighing room came under intense security throughout the hearing.

Kelleway said: “In my day I wasn’t allowed to put my toe in the changing room, they made it very clear women jockeys were not allowed in so we had our small room to change in.

“Obviously there’s a lot more women riders now, but you don’t see Serena Williams going into Andy Murray’s changing room and racecourses needed this kick up the backside to improve facilities – and why on earth haven’t we got female valets?

“A young jockey should be able to go and complain if they are being bullied or feel intimidated.”

Geraghty: Not the weighing room I knew 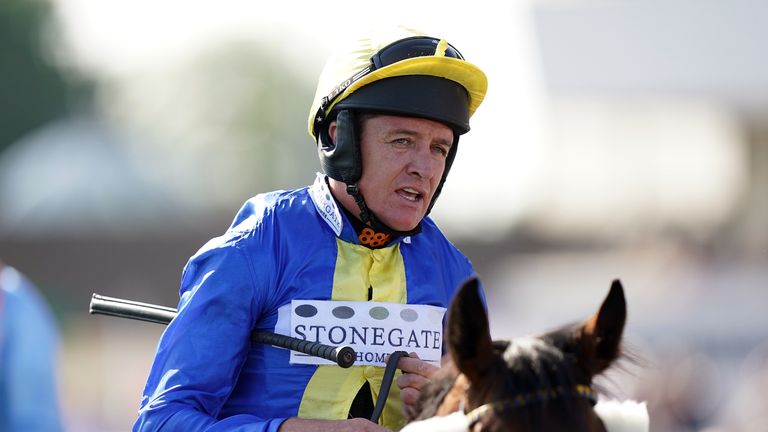 Former jockey Barry Geraghty has said that Dunne’s guilty verdict does not reflect the overall culture of the National Hunt weighing room.

Barry Geraghty, winner of the Cheltenham Gold Cup and Grand National in his glittering career in the saddle, felt it was a “sad” day for racing.

He said: “My reaction is sad I suppose, there is no winner, obviously it’s tough for Bryony, tough for Robbie and tough for racing as well. The Professional Jockeys Association have said that they do not believe Dunne has been subjected to a remotely fair process in the wake of his 18-month ban for bullying and harassing Frost.

“You’d have to be in the enquiry itself to have a grasp of all the detail, but for me it’s not a reflection on the weighing room and the culture, that’s the bit that really gets me.”

Responding to claims from the BHA’s Louis Weston, who in his closing statement on Wednesday claimed that the culture in the weighing room was “rancid’, Geraghty said: “Not the weighing room I was in for 24 years and I’ve only been gone just over 18 months.

“There is nothing more precious to me than my children and if they decided to pursue a career as jockeys the racecourse would be the only place I would fear for them, not the weighing-room culture, fellow riders or valets.

“The weighing room I was in for 24 years was a happy place, it was good fun. We’d have clashes and differences of opinion, but I never witnessed bullying and if someone was getting a hard time from someone else, someone would generally step in and address the situation.

“It’s hard to hear these comments like ‘rancid’ because that is not the place I spent most of my life.

“I’d be all for new measures – if they are brought in – to stop this sort of thing happening again. You don’t want to see an incident like this again. If there is an issue people need to be able to address it.

“But I think it’s unfair to the people in the weighing room to be painted in this way.”