It was not quite the scintillating first half that United had produced in Rangnick’s first game against Crystal Palace last week, with Alex Telles’ free kick being tipped onto the crossbar.

Norwich suffered an early blow when captain Grant Hanley was taken off with a shoulder injury, having fallen heavily after a tussle with Ronaldo. He was later seen watching from the touchlines with his arm in a sling.

However, Dean Smith’s side did not show any ill-effects of losing such a vital player as they dominated the second half and Przemyslaw Placheta, Teemu Pukki and Josh Sargent all went close.

But if the Norwich fans were unhappy with Ronaldo’s role in Hanley’s injury, he did little to endear himself to them further when he won a penalty after Max Aarons had grappled him to the floor.

The decision infuriated the Canaries, but Ronaldo fired home from the spot (75) to secure Rangnick’s second successive Premier League victory and clean sheet.

1903 – Ralf Rangnick is the second Manchester United manager to register a clean sheet in his first two league games in charge of the club after Ernest Mangnall in 1903. Spotlight. pic.twitter.com/IcjmVNUDWu

United had David de Gea to thank for both of those as he made late saves from Ozan Kabak to earn Gary Neville’s man of the match award. The goalkeeper also registered his 200th career clean sheet.

United now go level on points with fourth-placed West Ham, who face a trip to Burnley on Sunday, and sit in fifth place on goal difference. It was an undeserved result for Norwich, who remain bottom of the Premier League table with 10 points.

Norwich began well, but it was Manchester United who went close in the 14th minute. Telles’ free kick pinged off Sargent’s head in the wall, forcing a leaping save from Tim Krul to push the effort onto the crossbar.

Despite a good start, Norwich suffered an early injury blow that they can ill afford. With illness, Covid-19 positive tests and injuries already forcing Dean Smith to make five changes, captain Hanley was taken off with a shoulder injury. He landed heavily on it after a tussle with Ronaldo down the right, with Norwich fans booing the forward for the remainder of the game.

But the Canaries did go close just before the half-hour. Placheta – making his first Premier League start – sent the ball in from the right, easily dinking past Scott McTominay. His pass found Lukas Rupp, who laid it off to Pukki just behind, but the ball instead hit the striker on the shin before it ran away from his feet.

Both sides continued to trade chances as the half continued. Krul made two wonderful saves to keep United at bay – the first from a curling Ronaldo effort and another from Harry Maguire’s wayward header late in the half. De Gea also made a stop as Rupp nodded his way, with neither side able to break the deadlock.

Norwich tested United throughout the second half. Early on, Placheta easily dinked past Harry Maguire, but his shot went straight at De Gea. However, their best chance came in the 57th minute. Victor Lindelof’s poor defensive header only went as far as Rupp, who picked out Pukki inside the area and he found his space, but De Gea tipped the shot over the crossbar with his fingertips.

The hosts continued to test United – Sargent going close from one of Norwich’s many corners – but it was Rangnick’s side who eventually made the breakthrough as Ronaldo went to ground inside the area with Aarons’ arm around his shoulders.

Referee Darren England pointed to the spot, despite Norwich protests. As VAR checked it, Ronaldo placed the ball on the spot while Krul pumped up the supporters behind the goal. However, it was the United forward who came out on top, sending the goalkeeper the wrong way with a thumping penalty.

It was a breathless end to the game at Carrow Road, and Kabak twice went close to an equaliser. The first came just after the United goal as he nodded goalwards, but De Gea kept him out with an outstretched arm. He was there again as Billy Gilmour – who also saw a superb shot deflected behind – crossed his way, but De Gea batted the low header away.

Ronaldo also missed a huge chance to add a second late on, but he skied Marcus Rashford’s squared pass over the crossbar. However, a second goal was thankfully not needed as United took all three points back to Manchester. 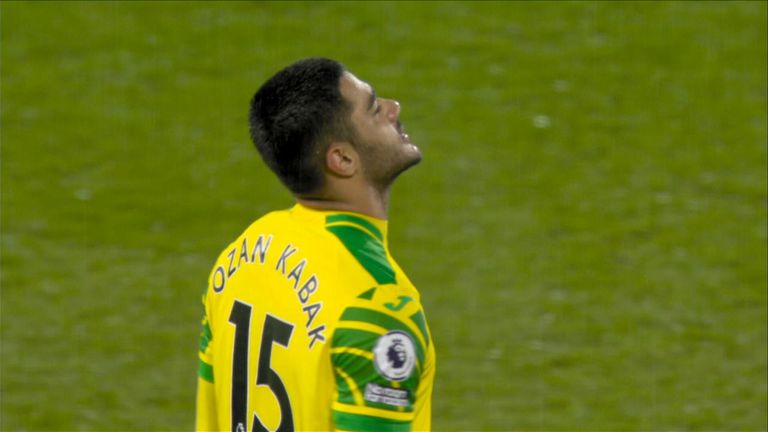 He was a huge part of why Manchester United came away with the victory and a second successive Premier League clean sheet. Norwich tested the keeper on many occasions, but he was at his acrobatic best to deny them deserved points.

Norwich host Aston Villa at 7.45pm on Tuesday, while Man Utd go to Brentford at 7.30pm on the same night. Watch free highlights from both games shortly after full time on Sky Sports.com, the Sky Sports App and the Sky Sports Football YouTube channel.