Ahead of a first Netball Quad Series since 2019, Helen Housby highlights the importance of it, hails England’s strength in depth and discusses their opponents at the Copper Box Arena.

Housby, speaking to Sky Sports from England’s team hotel, cannot wait to get started this weekend as the Vitality Roses take on South Africa, New Zealand and Australia over the course of four days at the Copper Box Arena in London.

The Netball Quad Series presents a unique challenge to every team, due to the distinctive styles of their opponents and the close proximity of the Test matches.

Together the quartet of teams make up four of the top five ranked outfits in world netball and it’s a competition that England’s Vitality Roses have never won.

With a home Commonwealth Games in July and Team England going into that as defending champions, the insights they gain from this competition will be vital. The question for Housby, is whether this year already feels different with a major Games now being in touching distance?

“I think, at least subconsciously, it’s inevitable that you’re going to think about it a little bit more. The years when you know that you’ve got a Commonwealth Games or a World Cup coming up, it does add a little bit of extra tension,” she said.

“You’re trying to put your best foot forward and everybody wants to get a feel for the other teams and see where everyone’s at.”

Housby made her international debut against Trinidad and Tobago in 2015 and she has been a prominent member of the national side.

During their Commonwealth Games triumph on the Gold Coast in 2018, she played in 25 of the 28 quarters and famously scored the match-winning goal in the dying moments of the final against Australia.

That victory for England came under the stewardship of Tracey Neville. Following the 2019 Netball World Cup in Liverpool, Neville stepped down and her successor, Jess Thirlby, has been focused on continuing to drive the Vitality Roses forwards. 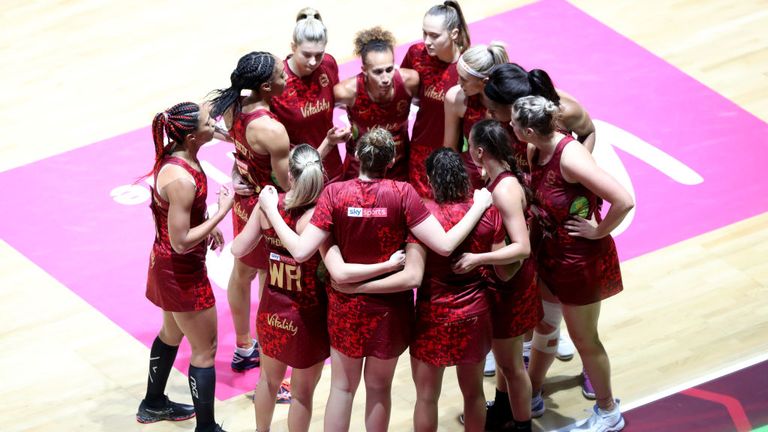 It’s really exciting having so much competition for places and it’s only a good thing having that going into a major competition like the Commonwealth Games.

“One of the biggest changes I’ve noticed in this English side in the last five years or so, is the depth that we’ve got now,” Housby said

“We’ve got so many girls who can now step up the plate internationally and do an incredible job. It’s something that Australia and New Zealand have always traditionally been able to do – they’ve always had big squads, with so many different players they could call into their starting seven.

“In historical English sides, that’s something we’ve not really been able to do [to the same extent]. Now, if you look at the girls we’ve got coming through, it’s exciting and the depth that we’ve got is exciting. That’s a testament to the full-time programme which England Netball has built in the last couple of years.”

Throughout the pandemic, England Netball have worked tirelessly to ensure that the national team are able to have as many opportunities to play at Test level as possible.

Many of the more experienced members of the squad, including Housby, weren’t always able to travel back to England over the past couple of years as they play their domestic netball in Australia, but their absence handed opportunities to others.

Sophie Drakeford-Lewis, Eleanor Cardwell, Laura Malcolm and Imogen Allison are just some of the athletes who benefitted from greater levels of court time. A Netball Quad Series schedule is a busy one, once the matches start there’s very little time for training in between.

England’s Vitality Roses face South Africa on Saturday, New Zealand on Sunday, Australia on Tuesday and then they will play in a deciding contest on Wednesday.

The final day of the competition, which is actually Housby’s birthday, will feature a third versus fourth contest and a final.

The unique challenge of a Quad Series is adapting to different styles in quick succession, and it’s a feature that will be part of the Commonwealth Games later this year too.

With seven years of international experience under her belt, Housby knows the Vitality Roses’ opponents well and first explained what to expect from South Africa.

“They’re a very tenacious kind of side, I actually think that they play quite similarly to Australia in ways, in terms of the man-on defence,” she noted.

“Historically they’ve had some really big names like a Karla Pretorius who sometimes plays off the body and does things that are a little bit more rouge!

“They are quite hard to pin down as a team and some of what they do is quite unorthodox. You know that you’re going to get a lot of energy from a South African team; they’re always trying to prove themselves on the world stage.”

Last year, the Vitality Roses won a series in New Zealand for the first time following a 49-45 victory in the deciding Test in Christchurch. Housby wasn’t part of that tour, but has ample experience against the world champions to draw from.

“New Zealand are all about space. They’re one of the smartest international sides in the way that they mark the space, probably more than the player,” she said.

“They defend quite a lot differently than other nations; they do a three-over or a wall on a centre pass. They quite often drop into a zone structure, so it can be a bit different to figure out.

“They’re so good on the ball, their skills are something that makes them stand out and their shooters really move well in the circle. They’ve got good [netballing] brains across the board.”

The Vitality Roses’ final opponents are an outfit Housby knows incredibly well, having played her domestic netball in Australia since 2017, and with a number of teammates in their national side.

“Quite often, they have an orthodox shooting style with a holding shooter and goal attack who does a lot of movement. This team is maybe a bit different; they’ve got some moving goal shooters and they can change up their line-up quite a lot.

“They’ve got a lot of people who can come off the bench and make big impacts on the game. Traditionally, Australia are very physical, very loud and they do the basics really, really well.”

The Vitality Roses will be first on court on Saturday, with every match of the Netball Quad Series being shown live on Sky Sports and streamed on the Sky Sports YouTube channel for viewers in the UK and Ireland.

It’s a 2pm first centre pass against South Africa before New Zealand and Australia kick-start their campaigns against each other at 4.15pm.