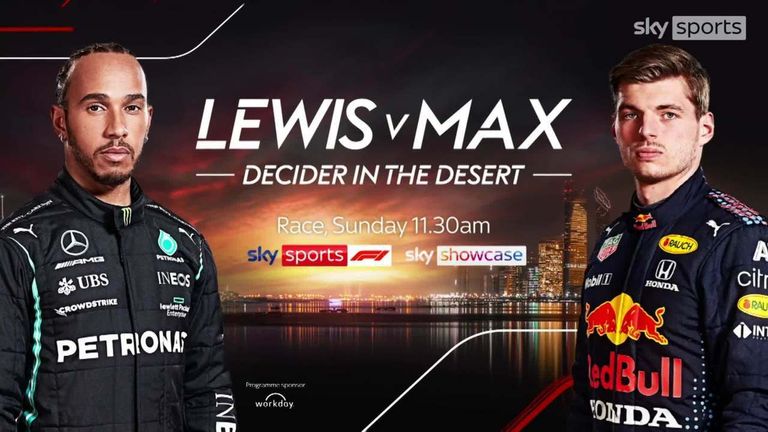 How does it stand in the championship?

After 21 of this season’s 22 races, Max Verstappen and Lewis Hamilton are tied on 369.5 points at the top of the drivers’ standings.

The Red Bull driver has won nine races to the Mercedes man’s eight.

Who starts where for Sunday’s race?

Against pre-qualifying expectations it was Red Bull’s Verstappen and not Mercedes’ Hamilton who claimed the season’s final pole position with a Q3 performance described as a mark of “greatness” by Sky F1 pundit and former world champion Nico Rosberg.

Verstappen therefore starts at the head of a Sunday grid for the 10th time this season, with Hamilton eight metres behind in second place. It will be the eighth time they have started together on the front row this year; Verstappen has won four of those previous races to Hamilton’s three.

One potentially crucial difference this time is that the contenders will start the race on different tyres.

Verstappen will be on the grippier but less durable softs, Hamilton on the slightly slower but more durable mediums. While that should theoretically give the Dutchman a grip advantage off the line, the Briton should then be able to run longer and pit later in the first stint should Mercedes choose.

When does Sky live coverage start and when’s the race?

All the build-up and the big 58-lap race itself is live on Sky Sports F1, Sky Sports Main Event and Sky Showcase.

Coverage on Sunday starts at 11.30am ahead of a 1pm race start.

What’s at stake for each driver?

Verstappen, the 24-year-old in his seventh season on the grid, is aiming for his first F1 title. He would be the first Dutchman to become champion and just the second Red Bull driver after Sebastian Vettel.

For Hamilton, the most significant achievement in the sport’s history is up for grabs. An eighth world title would set a new all-time outright record for drivers’ championships, one more than Michael Schumacher.

One to go: How it stands in the title chases

Have drivers been tied on points going into a final race before?

Only once before in the 71 previous seasons of the world championship.

That was back in 1974 when Brazil’s Emerson Fittipaldi and Switzerland’s Clay Regazzoni were tied heading into that season’s final round in the USA.

But that was in a campaign of only 15 races, making the fact Verstappen and Hamilton are level after 21 rounds all the more remarkable.

How can Verstappen or Hamilton win the title?

To put it most simply, whichever one wins the race is world champion (they have won 17 of the season’s 21 races between them so far).

To put it slightly less simply, whichever one finishes ahead in the top eight positions is also world champion.

Can they finish level on points – and what happens then?

Yes, and in such a scenario Verstappen would take the title.

The first is if both drivers finish outside of those points-scoring positions entirely, that means 11th or lower (including race retirement).

Up to 2021, this had never actually happened in races that both Hamilton and Verstappen had competed in yet has occurred twice this season.

The first time was in Azerbaijan in June, when Verstappen suffered a tyre blow-out while leading and Hamilton finished 15th after plummeting down the order, once knocking the wrong steering wheel button on the race’s late restart. Then, of course, there was the high drama of the Italian GP in September when the rivals ended up beached in the gravel trap after colliding while battling over position.

But there is one other way they could finish level on points too.

If one were to finish Sunday’s race ninth (two points) and the other 10th with the fastest lap bonus (1+1) then they would be tied on 371.5 points. Again, due to countback, Verstappen would be champion.

Drivers have never finished a season tied on points at the top of the championship; the closest-ever finish was 0.5 points between Niki Lauda and Alain Prost in 1984.

If a driver finishes outside the top 10, they cannot score a point even if they hold the race’s fastest lap.

Could the season be decided by a collision?

Lewis Hamilton says: ‘it’s great that it’s clear everyone knows what the rules are’ after race director Michael Masi stated points deductions will be enforced at the F1 season showdown with Max Verstappen at the Abu Dhabi GP.

Lewis Hamilton says: ‘it’s great that it’s clear everyone knows what the rules are’ after race director Michael Masi stated points deductions will be enforced at the F1 season showdown with Max Verstappen at the Abu Dhabi GP.

The question that has inevitably cropped up in conversation and conjecture all week, given what has been the increasingly combative nature of Verstappen and Hamilton’s rivalry, making some kind of collision a not entirely fictitious prospect.

After all, the duelling pair have collided to race-ending effect for at least one car on two occasions this season – and very nearly with a similar consequence in Saudi Arabia last weekend. There have also been numerous wheel-touching and off-track moments as they have fought over positions.

Championship-deciding crashes have been seen in F1 before, although not especially recently.

Both the 1989 and 1990 title fights between Alain Prost and Ayrton Senna were settled in this way at the respective campaign’s penultimate rounds, while Michael Schumacher came together in final-round deciders with Damon Hill in 1994 and Jacques Villeneuve in 1997.

Attempting to draw a line under such tactics, the FIA took Schumacher’s season’s points away from him after the controversial conclusion to the latter campaign and all final-race showdowns have since passed without such contentious incident. F1’s rulebook on driver conduct is rather more comprehensive nowadays.

Indeed, FIA race director Michael Masi reminded all competitors in his usual pre-event notes on Thursday about those regulations and the sporting penalties, such as points deductions, allowed for unsportsmanlike conduct.

Speaking to Sky F1 on Saturday, Masi said: “As a driver deep down you have a very good sense of right and wrong, and between the title protagonists I think there is a pretty clear understanding of where the line is.

“But I’m quite hopeful between them all, Mercedes and Red Bull, Max and Lewis, they want to sort it out on track with an exciting race to end what has been an exciting 2021 world championship.”

What’s the Abu Dhabi track like? And what has changed there? 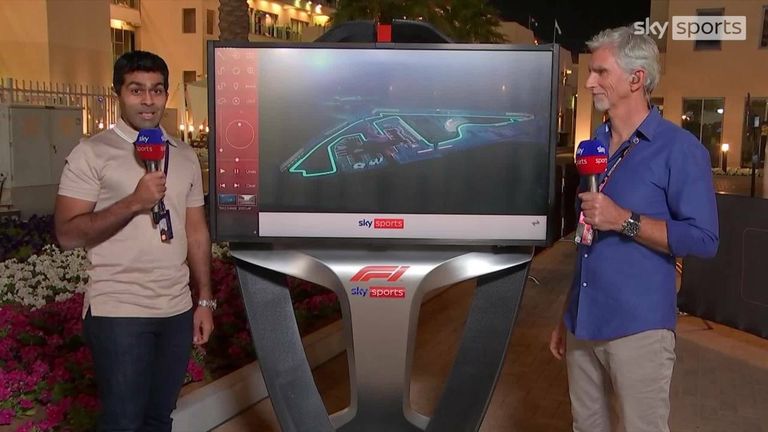 Karun Chandhok and Damon Hill analyse the changes made to the Yas Marina Circuit for the 2021 finale in Abu Dhabi.

Karun Chandhok and Damon Hill analyse the changes made to the Yas Marina Circuit for the 2021 finale in Abu Dhabi.

The Yas Marina circuit in Abu Dhabi in the United Arab Emirates joined the calendar in 2009 and has had the honour of hosting the final race of the season in every year since 2014.

It will be the fourth time in those 12 years that it has staged a title decider.

While arguably still the sport’s most spectacular-looking venue, with a 499-room hotel that straddles the circuit its unique feature, the layout has generally not produced thrilling racing.

The track gained infamy at the final round of 2010 when pre-event title leader Fernando Alonso spent much of the race trapped behind a significantly-slower Renault of Vitaly Petrov, which allowed Sebastian Vettel to cash in and claim his maiden title.

The advent of DRS the following season helped improve things and there have been some more exciting races in the years since, although last year’s Verstappen-dominated event proved particularly soporific.

Aware of that reputation, the circuit has this year been remodelled in three places of the lap to help create more overtaking and the possibility for wheel-to-wheel racing. The drivers have largely given it positive reviews since Friday.

The chicane before what was Turn Seven has been removed and the hairpin at what is now Turn Five widened. At the end of the second DRS zone further around the lap, four corners have been taken out with one fast banked turn now in its place (Turn Nine). Four corners around the hotel section have also been altered to improve racing.