Klay Thompson returned from two-and-a-half-year absence with 17 points in 20 minutes of play, and Stephen Curry scored a game-high 28 points on Sunday night as the Golden State Warriors snapped a two-game losing streak with a 96-82 win over the visiting Cleveland Cavaliers in San Francisco.

Playing for the first time since tearing the ACL in his left knee in Game 6 of the 2019 NBA Finals, Thompson needed just 40 seconds to record his first basket of the season and less than a half to throw down his first dunk and splash his first 3-pointer.

The five-time All-Star finished 3-for-8 on 3-pointers and 7-for-18 overall from the field. He also had three rebounds, one assist and one block following a 941-day absence that included a ruptured right Achilles in a comeback attempt before the 2020-21 season.

Highlights of the Atlanta Hawks against the LA Clippers in Week 12 of the NBA.

Inspired by Thompson’s return, the Warriors led by as many as nine points in the first quarter, then 24 in the third before the Cavaliers, seeking a third win in their last four games, made things interesting in the final period.

A pair of 3-pointers by Rajon Rondo helped the visitors get within 85-75 with 5:47 to go before Thompson’s third 3-pointer of the night, with 3:45 remaining, helped Golden State keep the Cavaliers at arm’s length.

Curry shot 4-for-11 on 3-pointers on a night when he and Thompson combined for seven of Golden State’s 10 threes in the team’s 42 attempts. 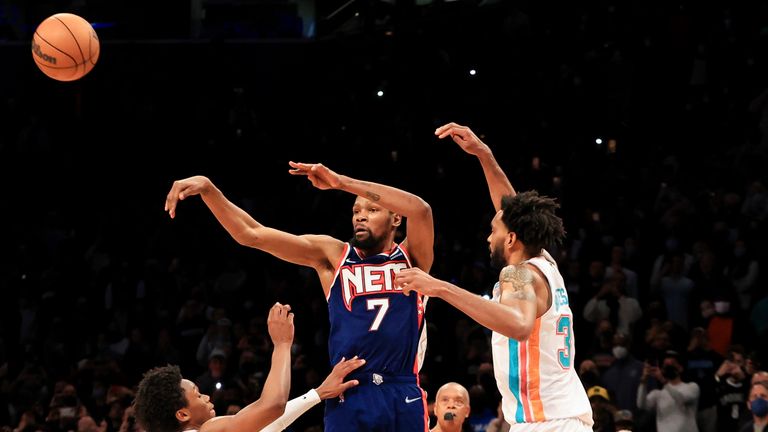 Highlights of the San Antonio Spurs against the Brooklyn Nets in Week 12 of the NBA.

Jordan Poole had a pair of 3-pointers among his 14 points off the bench, while Andrew Wiggins added 10 for the Warriors, who swept the two-game season series. Highlights of the Minnesota Timberwolves against the Houston Rockets in Week 12 of the NBA.

Draymond Green, battling a tight left calf, started the game as a tribute to Thompson’s comeback. He committed an intentional foul seven seconds into the contest so that he could be removed, and he never returned.

Lamar Stevens had 17 points to pace Cleveland, which was making its second stop on a six-game Western swing. The Cavaliers must endure the second half of a back-to-back Monday night at Sacramento. 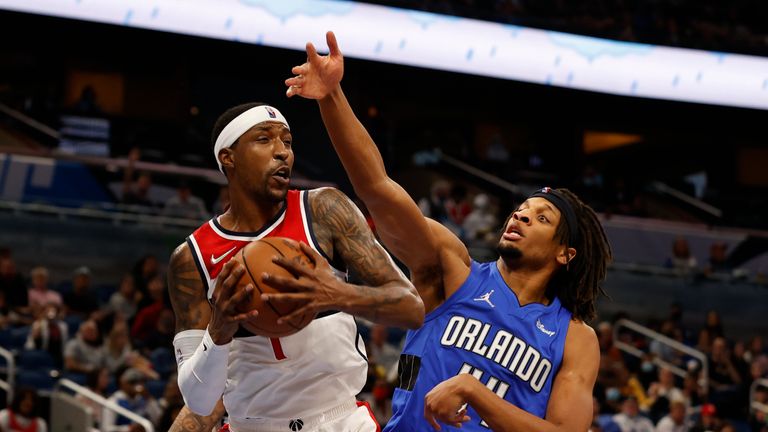 Highlights of the Washington Wizards against the Orlando Magic in Week 12 of the NBA.

Rondo finished with 15 points and Jarrett Allen 12 to complement seven rebounds. Evan Mobley had 11 points for the Cavaliers.

The Cavaliers lost despite outshooting the Warriors 42.7 percent to 40.2 percent from the field and 29.2 percent to 23.8 percent on 3-pointers. Rondo connected on three of Cleveland’s seven 3-pointers without a miss.

The visiting Memphis Grizzlies set a franchise record with their ninth straight victory as Desmond Bane shot 5-for-8 from 3-point distance and scored 23 points. Highlights of the Memphis Grizzlies against the Los Angeles Lakers in Week 12 of the NBA.

LeBron James had 35 points, nine rebounds and seven assists for the Lakers, who came in riding a season-long four-game winning streak.

It was the 11th consecutive game that James scored at least 25 points. James, 37, is the oldest NBA player to accomplish that feat.

Anfernee Simons scored 31 points and made seven 3-pointers, and Jusuf Nurkic contributed 14 points, 16 rebounds and nine assists for Portland, which won for just the second time in its past eight games and fifth in its last 21 outings. Highlights of the Sacramento Kings against the Portland Trail Blazers in Week 12 of the NBA.

Tyrese Haliburton recorded 17 points and nine assists and Alex Len added 16 points and 10 rebounds for the Kings. De’Aaron Fox scored 14 points, Harrison Barnes had 13 and Buddy Hield tallied 10 for Sacramento, which has lost four straight games and 12 of 17.

Nikola Jokic had 22 points, 18 rebounds and six assists to lead the Nuggets.

Jokic had answers when the Nuggets needed them, carrying them in the third quarter when the offense disappeared and then answered again in the final minute.

Moments after the Thunder’s Mike Muscala tied the game at 95 in the final minute, Jokic attacked the basket, earning his way to the free-throw line, where he put Denver back in front. 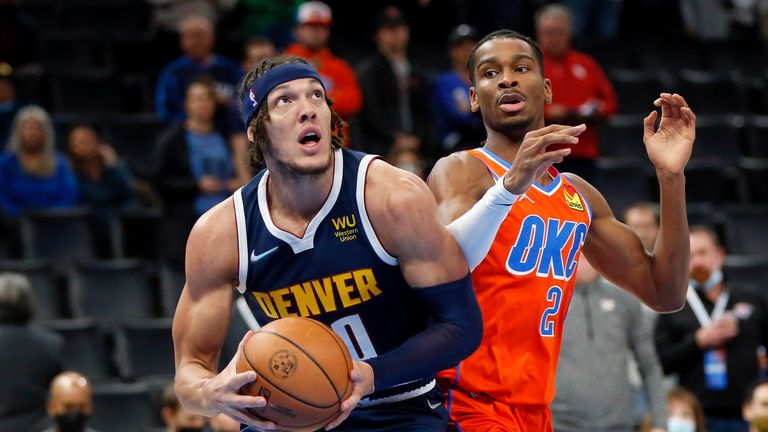 Highlights of the Denver Nuggets against the Oklahoma City Thunder in Week 12 of the NBA.

A pair of Oklahoma City misses helped the Nuggets hold on for their second consecutive victory.

The loss was the fourth consecutive for the Thunder.

Jokic had nine of his rebounds in the fourth. Oklahoma City was just 1 of 9 from beyond the arc in the fourth, though, and didn’t attempt a free throw.

Austin Rivers scored a season-high 22 off the bench, hitting six 3-pointers while Jeff Green added 16 and Barton 14 — eight of them in the first three minutes of the game.

Luka Doncic recorded a triple-double of 22 points, 14 rebounds and 14 assists, and the Dallas Mavericks extended their winning streak to six games while snapping the Chicago Bulls’ streak of nine games, 113-99, on Sunday in Dallas.

A back-and-forth contest through the first three quarters, the Mavericks went on a 19-9 run to open the fourth quarter. That gave Dallas a double-digit-point lead it held the rest of the way and extended to as many as 18 points down the stretch. 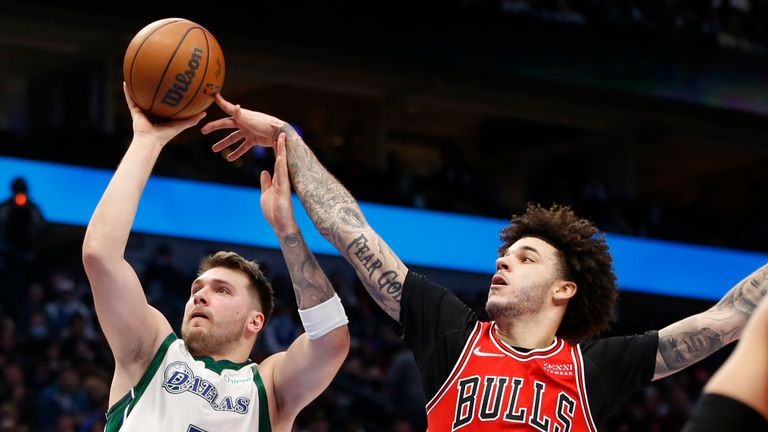 Highlights of the Chicago Bulls against the Dallas Mavericks in Week 12 of the NBA.

All five Mavericks starters scored in double-figures, led by Doncic. Maxi Kleber and Dorian Finney-Smith scored all 18 and 12 of their points on 6-of-9 and 4-of-7 shooting from 3-point range, keying Dallas’ 16-of-36 performance beyond the arc.

Fred VanVleet made two 3-pointers in the final two minutes and finished with 32 points while Pascal Siakam added 29 points and 10 rebounds for the Raptors, who extended their season-best winning streak to six games. 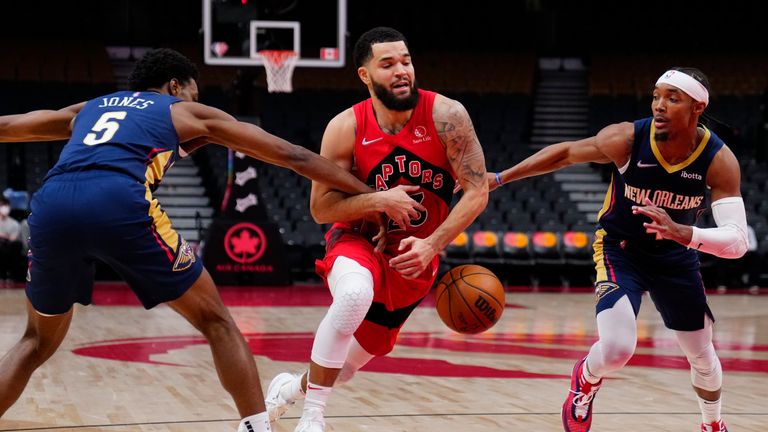 Highlights of the New Orleans Pelicans against the Toronto Raptors in Week 12 of the NBA.

Brandon Ingram scored 22 points for the Pelicans. Teammate Jonas Valanciunas, playing in Toronto for the first time since being traded by the Raptors to the Memphis Grizzlies in 2019, added 20 points and 17 rebounds. Herbert Jones scored 13 points and Nickeil Alexander-Walker and Devonte Graham each chipped in 11.