“Hooray for me,” said Klay Thompson, admittedly surprised to have found himself dunking on an opponent during his first game for the Golden State Warriors in 941 days.

Thompson made his long-awaited comeback on Sunday night as he logged 17 points, three rebounds, one assist and one block in 20 minutes of play to help the Warriors to a 96-82 victory over the Cleveland Cavaliers.

It marked his first appearance since suffering a torn ACL in his left knee in Game 6 of the 2019 NBA Finals, his recovery from which had been dealt another crushing setback when he ruptured his right Achilles prior to his scheduled return in the 2020-21 campaign.

His first bucket in two-and-a-half years was a nothing-held-back, paint-driving floater with the hang-time and body adjustment of a player that had never been away. And the Warriors treated him like he had never been away, orchestrating their first points of the night through the 31-year-old.

Where some may have grimaced at the sight of a potentially sticky landing, the Warriors star was arguably feeling as at home and at peace as he had in some time.

“I’ve gotten the chance to know Klay a little bit over the years and let me tell you something, he’s never scared,” said three-time NBA champion BJ Armstrong on Sky Sports’ Heatcheck. “That’s the one thing with Klay. When Klay is out there playing he’s in his comfort zone and you can see, he’s put in the work behind the scenes, now we know what we was doing, doing his rehab, what he was doing in the dark.

“Because when he got out there in the bright lights he laid it out there on the line. Klay came out there like he hadn’t missed a step, it was a very triumphant return, I was thrilled.

“I was so happy for him because behind those smiles you knew there were a lot of dark days that he had to go through to get to this point. I just hope he continues to play, that he gets even stronger, but more importantly, I thought he was prepared.

“His teammates were so happy for him. I just hope Steph Curry didn’t get hurt cheering for Klay Thompson, he was running up and down the court. How about this? The first play of the game, they call a play for Klay and he shoots the very first minute.”

Thompson continued his comeback on Tuesday night when he posted 14 points, three rebounds and three assists in 20 minutes of Golden State’s 116-108 defeat to the Memphis Grizzlies, for whom it marked their franchise-record 10th straight win.

Few have been as happy to welcome him back as teammate Steph Curry, who credited Thompson for pushing him towards on-court greatness as the NBA’s all-time leader in three-pointers made – a feat he achieved against the New York Knicks in December while Klay was still away working with the Warriors’ G League team in Santa Cruz.

“I’m not the shooter I am if I don’t get to see Klay every single day do what he does,” Curry said. “He keeps you sharp and understands to shoot the ball the way I want to, there is another guy that can do it, too.” 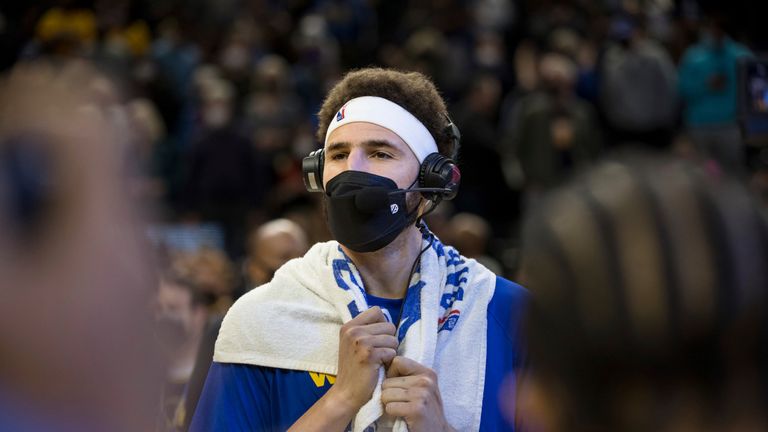 Curry had willingly allowed his teammate to receive the final on-court introduction at Staples Center upon his return, the result being a spine-tingling reception setting the tone for what would prove the most viewed regular season moment in NBA history.

A Splash Brothers reunion makes for the ‘pick your poison’ cocktail of clutch shooting, relentless off-ball movement, decoy threat and create-for-yourself authority that previously reigned in the NBA.

“I couldn’t imagine playing with any other point guard because we got such a great chemistry,” Thompson said this week. “We know each other’s favourite spots and where we want the ball. I’m just thankful to share the backcourt with him because he’s such a selfless and amazing competitor and teammate.”

Throw in Draymond Green, who missed Tuesday’s loss to Memphis after sustaining a calf injury before Sunday’s Cavaliers matchup, along with the emergence of sixth man Jordan Poole and the eventual return from injury of 2020 first-round pick James Wiseman, and the Warriors look a force. While questions are asked of Thompson’s reintegration, the extent of his injury layoff and nature of his recovery calls for patience when it comes to rekindling his on-court partnership with Curry.

“In a strange way, these next three-four weeks are going to be about re-establishing our identity as a team,” said coach Steve Kerr. “We did a great job these first 40 games of becoming a great defensive team. A lot of guys have played important minutes and have established roles. Now that’s going to be shaken up a little bit because Klay is going to play a huge role.”

Golden State head into Thursday night’s meeting with the Milwaukee Bucks sitting 30-10 and second in the West having lost three of their last four following an 18-2 start to the campaign prior to December.

Watch Thompson and the Warriors take on the Bucks on the road live on Sky Sports Arena from half past midnight in the early hours of Friday morning.