Italy’s competition authority announced that it had fined Amazon €1.129 billion, or roughly $1.3 billion at today’s exchange rate. According to the antitrust watchdog, Amazon has abused its dominant market position and pushed third-party sellers to use the company’s logistics service ‘Fulfillment by Amazon’ (FBA).

The Italian authority, the Autorità Garante della Concorrenza e del Mercato (AGCM), details its thinking in a statement and a 250-page report. According to them, third-party sellers don’t get the same treatment if they’re leveraging FBA or using their own logistics stack.

Sellers who take advantage of FBA can participate in the company’s paid loyalty program Amazon Prime. Subscribers get free deliveries on some products. In addition to Amazon’s own inventory, products from third-party sellers that come from Amazon’s warehouses thanks to FBA also get a Prime label.

But that’s not all. On Amazon’s product page, the company automatically selects a seller for the buy box. On a computer, the buy box is the box on the right side of the screen that lets you add a product to your cart or buy directly with the ‘Buy Now’ button.

You can see other sellers in a tiny box below the buy box. According to Italy’s competition authority, sellers who use FBA have a higher chance of getting featured in the buy box compared to other third-party sellers.

I tried to find a good example on Amazon.it and here’s what I found on this toilet seat. Amazon itself doesn’t sell the product directly. You can only get it from third-party sellers. By default, Amazon features WOLTU GmbH in the buy box. The item is shipped by Amazon as WOLTU GmbH uses FBA. And you can get free expedited shipping with Amazon Prime. 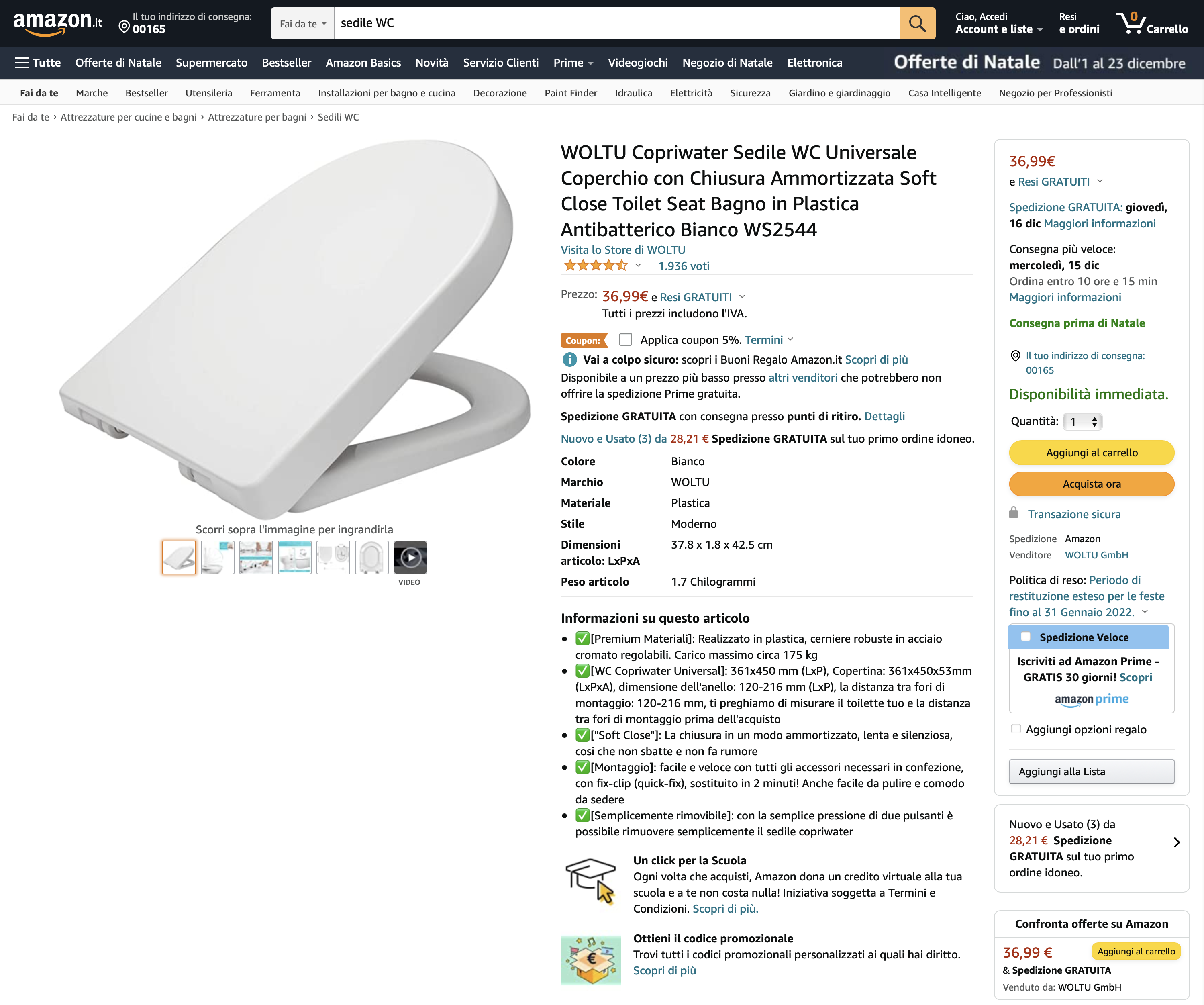 Below that buy box, there’s a tiny box that says you can get it from another seller. This time, we can see WOLTU GmbH once again (and a used product from ‘Amazon Warehouse’). It’s the same seller, but they ship it directly to you and you also get free shipping. 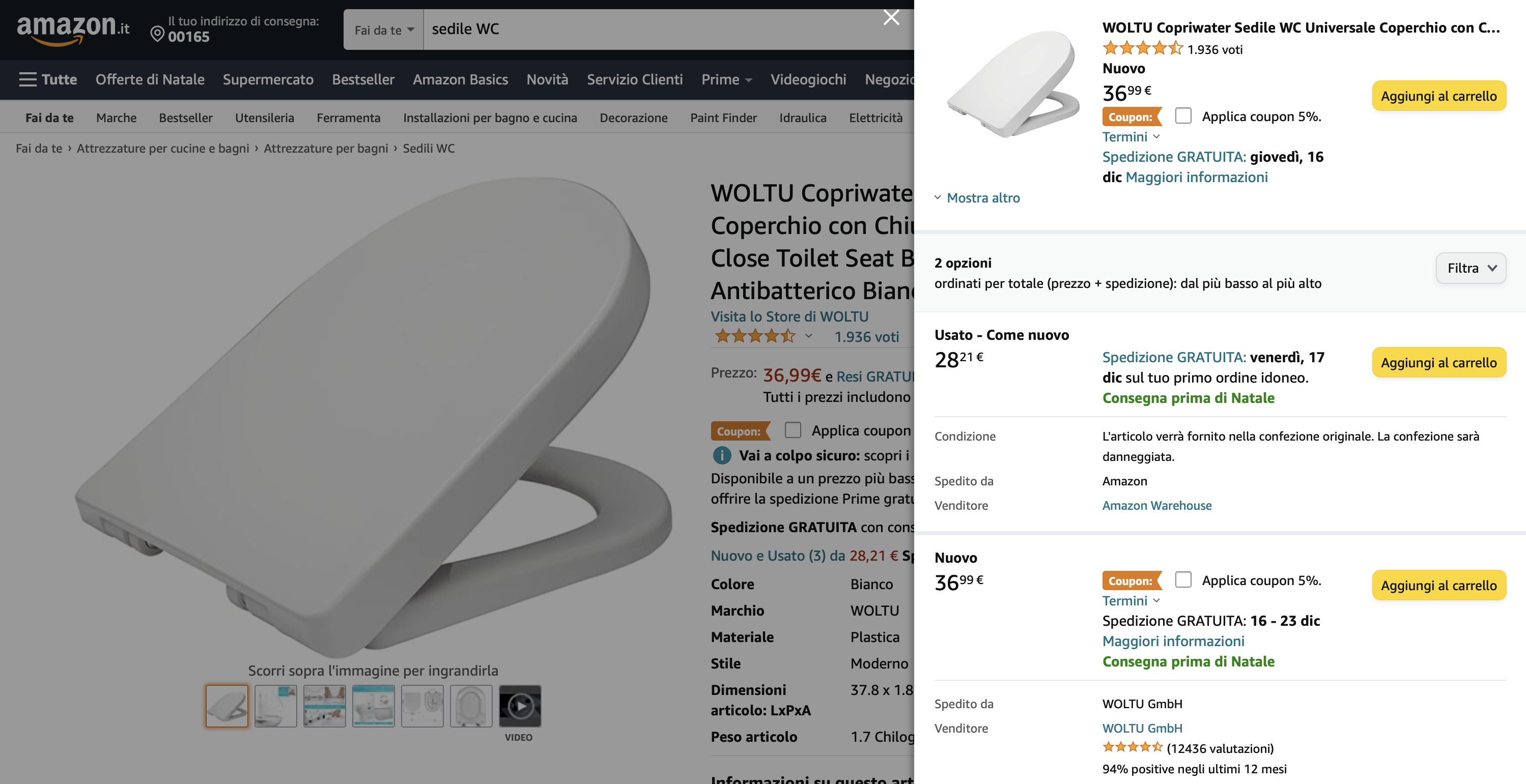 Why does WOLTU GmbH list the same toilet seat twice? FBA isn’t a free logistics service. Amazon gets a larger cut from items that are sold through FBA. And it seems like WOLTU GmbH would get more revenue from a direct sale. But it’s unlikely that customers will choose to get the toilet seat from the seller directly because it’s hidden in a submenu.

A recent study from the Institute for Local Self-Reliance has highlighted that Amazon is generating more and more revenue from third-party sellers, highlighting that FBA is a vicious circle and that third-party sellers have become a captive audience:

In a similar fashion, Amazon has compelled sellers to buy its warehousing and shipping service, Fulfillment By Amazon (FBA). Amazon’s algorithms heavily favor sellers who do so, making FBA all but required in order to generate sales on the site. As a result, the share of sellers who have left other carriers and signed on to FBA has soared in recent years. By compelling this captive base of businesses to use its shipping service, Amazon has grown into a major logistics provider almost overnight. Its parcel delivery operation now rivals that of the U.S. Postal Service in scale. And, over the last few years, Amazon has steadily raised its storage and shipping fees, using FBA as yet another way to squeeze revenue from sellers.

The Italian authority has asked Amazon to create a new set of standards that would be fair to third-party sellers whether they are using FBA or not. The company will also have to implement behavioral measures. A monitoring trustee will review the changes.

Amazon has shared a statement with Engadget. “We strongly disagree with the decision of the Italian Competition Authority (ICA) and we will appeal. The proposed fine and remedies are unjustified and disproportionate,” the company said.