From the moment he met Kenny Jackett to discuss a move to Leyton Orient in the summer, Harry Smith knew this was the man to stop his career from stagnating.

The 26-year-old left Macclesfield to join Northampton in July 2019, with a short loan spell at Motherwell sandwiched in between just 38 league appearances across two seasons for the Cobblers.

So when the call from Jackett came, it could barely have been timed any better.

Speaking in an exclusive interview with Sky Sports, Smith said: “I spoke to the manager Jon Brady at the end of the season and I said I felt like my time was a little bit hit-and-miss at Northampton; it had been stop-start with injuries and I couldn’t get a run in the team. We had an honest conversation and I said I wanted to try and move on and get closer to home.

“Once I found out about Orient and especially when Kenny signed up to be the new manager, it was a perfect fit for me. He was a massive draw. I have played against a few of his teams in the past, including Portsmouth, and always seemed to do quite well, which he mentioned when I spoke to him.

“I went down and met him and I knew within five minutes that he would be the right manager for me.”

And having trusted his gut instinct and signed a two-year deal at the Breyer Group Stadium, if there were any lingering doubts, they were well and truly extinguished by an off-the-cuff remark from a familiar face.

“On the first or second day I was there, Neil Harris – my ex-manager at Millwall – came down to watch training. He saw me, we had a chat and just told me Kenny would be brilliant for me. That was exactly what I needed. It was music to my ears to speak to an old manager and get that reassurance from him.”

With a career-best 11 league goals already, Smith’s return speaks volumes about his contentment on and off the pitch – he even won the November Goal of the Month award for a stunning volley against Sutton. “That’s not usually my territory!” the 6’5″ striker laughs.

It also appears to have justified his decision to return south for the first time since leaving Millwall in 2018.

“I had been away a long time, had ups and downs along the way and never really settled,” he continues. “In the back of my mind, I thought that if I could get back down south of the river, I could really settle and kick on the football.

“To be on the number of goals that I am now is testament to myself and the hard work I’ve put in since I joined the club. I have got to praise the lads that I play with and the management team as well.

“I’ve not really worked specifically on my own game. I do feel that over the last few years I have probably listened too much to what I’m getting told to do and not played my own game. Here, the gaffer has wholeheartedly put his trust in me and trusts me to play my own game.

“I’ve pretty much played every minute of every game since the second game of the season and only come off once. It’s probably the place I’ve felt most content, where I have most enjoyed my football and where I have been all round happy in my career.”

His strike partnership with Aaron Drinan has, undeniably, played a substantial part in that happiness. The pair have scored 21 of Orient’s 37 league goals between them so far this term, which puts them fourth and fifth in the individual scoring ranks and the team second only to leaders Forest Green (43) in the division.

Drinan, 23, was shipped out on four loan spells during his three years at Ipswich, before finally being given a shot in the first team last season and then heading to east London less than a fortnight before Smith.

There clearly has been an instant connection. Do the pair feel they have a point to prove?

“I’m going to speak on behalf of me, but speaking to Drizzy and getting to know him, he feels that as well. I think at Ipswich, he probably didn’t get the game time he wanted and that’s similar to me at Northampton. We have dropped down a level, back into League Two, to do that.

“I remember speaking to Steve Morison a few years ago and he and Lee Gregory had it at Millwall – they just clicked. That went on for a few years and they had a good partnership. I feel like, with Drizzy, we just work really well with each other and have a great relationship off the pitch, which is important. On the pitch, we know exactly what our strengths are and what each of us are going to do. I think that helps me and when one scores, the other scores, so there’s a little bit of a mini competition there, too.

“Every player has got a point to prove in one way or another, but more so for me with previous stuff that I have gone through. I don’t feel as though I have truly hit my best yet, but with the season I’m having so far, hopefully this is just the start of things to come.”

On December 29 – Covid-dependent, of course – Orient will reach the midway point of the Sky Bet League Two season.

They currently sit two points outside the play-off places, just five outside the top three and, if they could improve their away form – they have won just one of 11 on the road – Smith knows the standings would look an awful lot healthier.

“It is frustrating. We are so dominant at home and probably in the top two or three teams at home based on league form. We have lost there recently to Crawley but when we win there, we win quite comfortably – we have won by three or four goals a good few times this season. 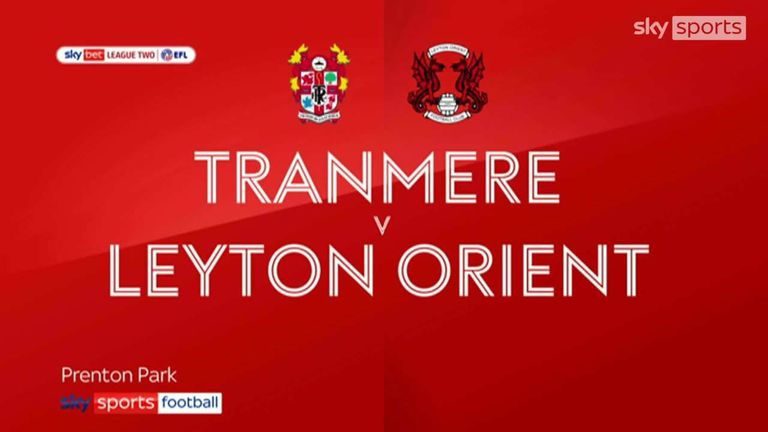 Highlights of the Sky Bet League Two match between Tranmere and Leyton Orient.

“We can’t seem to put our finger on what’s going wrong. We’re not looking too much into it, but we’re confident that once we get one away win, we can go on a little run.”

But he also knows league position at this point is – by no means – the be all and end all.

“Of course you want to be in the top three, there’s no doubt about it, but if you can stick around it by the New Year and really get going for the second half, that’s where teams really find their form. Look at Bolton last year – they were down in the bottom six or seven by January, February then hit their peak, finished third, got automatic promotion and are now doing well in League One.

“We know the performances are there and that’s the frustrating thing at the minute; a lot of times this season, we have been the better team but we are finding ourselves on the wrong end of results and are drawing a few too many games but there’s a long way to go yet. We’re not writing anything off.”

Just seven and a half years ago, Orient were on the cusp of promotion to the Championship, only to lose out to Rotherham in the 2013/14 League One play-off final. Since then, the club have dropped out of the EFL, bounced back and are now looking to get back to where they once were.

Promotion talk may not be explicit at present, but the brief is clear.

“Everyone is massively keen [to get out of League Two]. That stems from the top. The owners are brilliant and I’ve not been at a club where the owners are so hands-on. They are in once or twice every month and I have been at clubs where I’ve never seen the owner before. Here, if they are not in the country and coming to the training ground, we’re having Zoom meetings every Friday just to have a catch-up. That from the management as well – they are brilliant.

“The club is not a League Two club. It’s good a good foundation and should be in League One minimum. That’s the aim this season.”