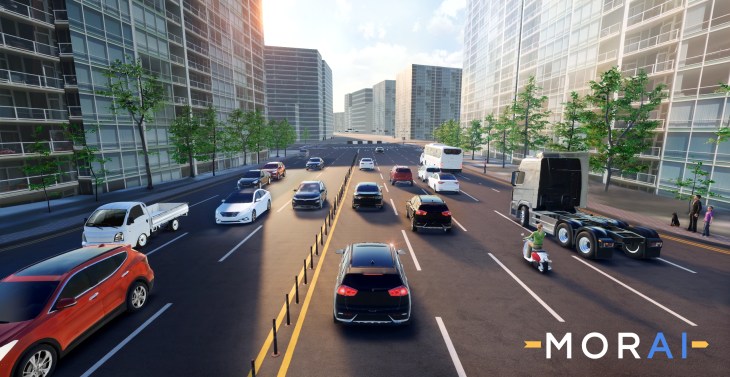 Morai, which provides autonomous vehicle developers with automotive simulation tools to verify the safety and reliability of self-driving systems, announced today it has raised $20.8 million (25 billion KRW) in a Series B funding round as it wants to increase its global presence, specifically into the U.S., Germany, Japan and Singapore.

The South Korea-headquartered startup, which has 84 employees, will also use the proceeds to double its headcount worldwide by the end of this year, CEO of Morai Jiwon Jung told TechCrunch.

Many autonomous vehicle companies use repetitive simulation tests to prove safety and reliability for their self-driving vehicle validation.

Morai’s simulator solution, called Morai SIM, gives users a variety of virtual testing scenarios with its high-definition (HD) map-based 3D simulation environments. One of Morai’s most unique features is its large-scale simulation platforms enabled by digital twin technology, a digital replica of an object in the physical world, co-founder and CTO of Morai Hong told TechCrunch. Morai SIM already replicated more than 20 cities across the globe.

In January at CES 2022, Morai unveiled the software-as-a-service (SaaS) model of its Morai SIM, also known as Morai SIM Cloud, which allows users to perform simulation tests in the cloud without the process of installing any software onto their local computers. As a result, users can test an AV driver against myriad simulation environments, regardless of the hardware they operate on.

Jung said that the company has considerable growth potential because its simulation platforms can be applied to autonomous driving and other areas like urban air mobility (UAM), logistics and smart cities.

“We will direct all our energy into sharpening our technological edge to further enhance our global competitiveness in the autonomous vehicle simulation platform,” Jung said.

“Morai’s simulator technology is projected to play a critical role in enhancing the safety and functionality of self-driving cars,” said KunHo Kim, executive director of Korea Investment Partners. “We expect to see the continued growth of the company since it has potential to lead the autonomous driving market not only in Korea but globally.”