Ralph Hasenhuttl says he was “not perfect” when questioning the professionalism of Southampton goalkeeper Alex McCarthy and would handle the matter differently in future.

With the injured McCarthy fearing he was not mobile enough to protect the entire goal, James Ward-Prowse raced back to provide cover and ended up playing Maupay onside.

Hasenhuttl said after the game McCarthy “must be definitely more professional than that”, adding he would have replaced him with youngster Harry Lewis had he known about his hamstring issue.

FREE TO WATCH: Highlights from the 1-1 draw between Southampton and Brighton in the Premier League

The Saints boss, however, struck a conciliatory tone ahead of their Premier League trip to Arsenal, saying: “I was not perfect to do this after the game.

“I didn’t have all the information I should have after the game and that is always an issue.

“I hadn’t spoken with everybody. I know more now about what happened on the pitch and I would do it differently.

“But now isn’t the time to speak about it. We took a few good things from the last game.” 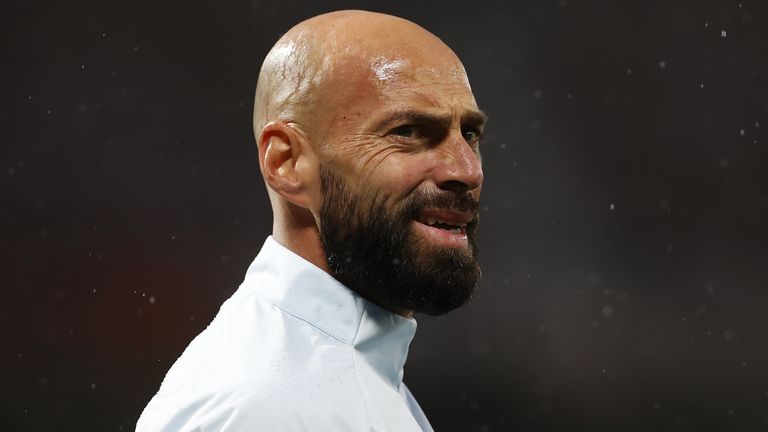 McCarthy has been ever-present for Southampton in the Premier League this season but that run will come to an end on Saturday, with the 32-year-old facing three to four weeks on the sidelines.

“Everybody is in good shape at the moment and it’s a pity Alex is out now,” said Hasenhuttl.

“I think against Brighton he did a very good job and kept us in the game two or three times in a fantastic way.

“What happened at the end was not right from our side.”

With Fraser Forster also sidelined by injury, 40-year-old Willy Caballero is set to make his Southampton debut at Arsenal.

Former Manchester City and Chelsea goalkeeper Caballero, who had been training with AFC Wimbledon to sustain his fitness since leaving Stamford Bridge in the summer, signed a short-term Saints contract on Monday.

“We’ve worked with him on some information, video clips, so he knows how he has to play with the ball and against the ball. It’s important for a goalkeeper,” Hasenhuttl said.

“He’s a smart guy, he is fit and coming in with a willingness to help us and this is what we need now.”

Follow every Southampton game in the Premier League this season with our live blogs on the Sky Sports website and app, and watch match highlights for free shortly after full-time.

Get all this and more – including notifications sent straight to your phone – by downloading the Sky Sports Scores app and setting Southampton as your favourite team.