Philippe Coutinho scored on his Aston Villa debut as his new club came roaring back from 2-0 down to draw 2-2 with Manchester United.

Ralf Rangnick’s side looked to be cruising with 13 minutes remaining after two Bruno Fernandes goals but Jacob Ramsey and Coutinho, who sprung from the bench with 20 minutes to go having joined on loan from Barcelona in midweek, created a famous comeback at Villa Park.

“I missed these games, I missed the Premier League,” Coutinho told Sky Sports.

His manager Steven Gerrard added: “You don’t lose talent. The key thing for Phil is he needs to be smiling and enjoying his football. Anyone who goes to work who isn’t in a positive place it’s difficult to perform and be at your best.”

Despite being without Cristiano Ronaldo due to a hip injury, United started with great intent and Fernandes gave them the lead after his tame strike from range somehow bobbled through the legs of Emiliano Martinez.

The game looked safe for the visitors when Fernandes finished in ruthless style after a misplaced pass from Morgan Sanson had allowed United to break. However, they couldn’t see the game through as Ramsey got the Villa Park crowd rocking with a well-taken finish with 13 minutes left.

Man of the match: Jacob Ramsey

Just five minutes later, Villa were level when Coutinho was on hand to strike from close range after a brilliant assist from Ramsey.

Philippe Coutinho scores the equaliser as Aston Villa come back from 2-0 down against Manchester United!

Sky Sports’ Roy Keane was disappointed with how United let the lead slip, he said: “For United, you get 2-0 in front and you think it’s game over but then we saw the weaknesses in United: that lack of control, particularly in midfield, and they give away a couple of goals they’ll be disappointed with.

“It shows their shortcomings. The table doesn’t lie, they’re seventh now. There are still plusses, there is quality and we saw that today. But there’s still that bit of weakness. There was no aggression. United looked tired in the second half.”

A few eyebrows were raised when the teams were announced with Rangnick handing a first Premier League start of the season to Anthony Elanga.

The 19-year-old was tasked with providing United with plenty of width down the left and gave Matty Cash a torrid time with his direct running and enthusiastic play. The opening goal came courtesy of an attack down Elanga’s side that presented United with a free-kick that Fernandes took short and blasted through the clumsy clutches of Martinez. 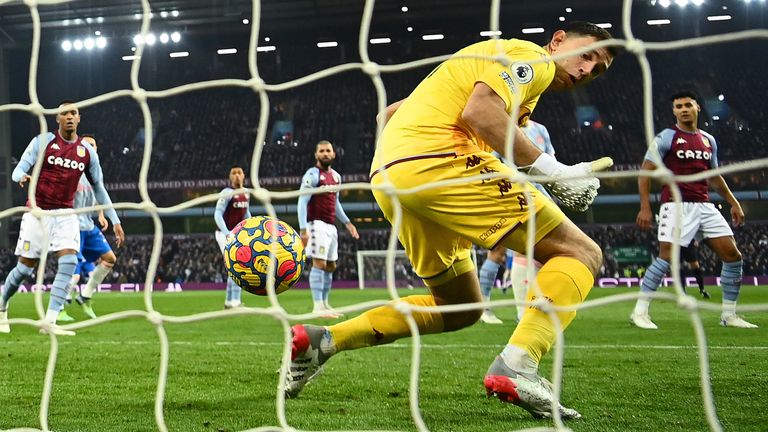 Bruno Fernandes is gifted the opener for Manchester United after a howler by Aston Villa goalkeeper Emi Martinez!

The Villa goalkeeper has been one of the star performers of the season this season but there no was hiding from this mistake.

Villa failed to have a shot or register a touch in the United box for the opening 30 minutes as Martinez was by far the busiest goalkeeper, making two saves from Mason Greenwood and palming an Alex Telles free-kick away from danger. Emi Buendia started to get Villa playing approaching half-time and he almost levelled when flicking a Lucas Digne – making his Villa debut – corner at goal but David de Gea reacted smartly.

Steven Gerrard sent out Villa with greater aggression after the break and with their defence pushed up a little higher, United were finding second balls harder to come by. Despite the improved tempo from the hosts it was United carrying the greater threat in the final third with Greenwood scampering clear but sliding an effort wide. The second goal would eventually come from the all-action Fernandes.

United pressed and under-pressure Sanson sent an under-hit pass that Fred lapped up, with the midfielder smartly laying off for Fernandes to strike in off the underside of the crossbar.

Sanson let out his fury on some touchline water bottles when he was replaced by Coutinho straight after, with the Brazilian quick to make an impact.

Tyrone Mings burst up the field and Coutinho’s presence in the build-up ended with the ball being prodding into the path of Ramsey to strike in front of the Holte End. It was his first goal at Villa Park.

Buoyed by his moment in front of his adoring public, Ramsey the turned provider. Buendia played through Ramsey to direct a first-time left-footed cross to the far post, where Coutinho turned home to send Villa Park into delirium and floor United.

“It was a tough one take – we had the game under control,” Fernandes told Sky Sports.

What the managers said

Aston Villa boss Steven Gerrard: “I thought we improved a lot in the second half, but it took a lot of honesty at half time because for the first 25 minutes we did not commit to what we wanted to do. We prepared to be aggressive and on the front foot and jump on Man United, I thought there was an opportunity for us but credit to them, they were better.

“The first goal came off the back of us being passive and second best so we deserved to be in the position we were at half time. From there it could not be any worse, credit to the players we rolled up our sleeves up at 0-2, we were on the front foot, much more like I want Aston Villa to play.

“We took a lot of positives from Monday, but we lost so I expected the reaction we got at half time from the whistle and had we had that for 90 minutes we might have taken more than a point.

“If you are second best and don’t take the handbrake off you will be picked off. All our good stuff came off the real honesty we didn’t have in the first 25 minutes.” 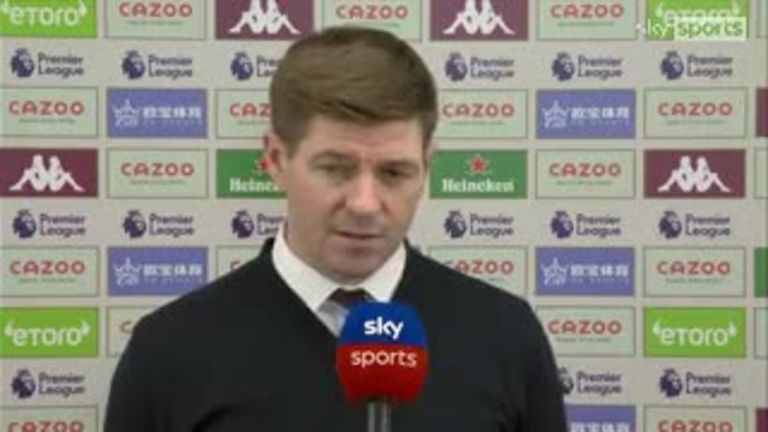 Gerrard praises his Aston Villa side’s reaction after going 2-0 down but then managing to take a point at home against Manchester United.

Manchester United boss Ralf Rangnick: “It is very difficult to find positives after these 95 minutes. I felt it was the best game since I came here, in the first half for 30 minutes we dominated the game. We took some steps forward but have a few things to do better.

“The plan was to press them in the midzone and we did that very well in the first 30 minutes, and control the ball, and those were the positives. When you are 2-0 up you have to defend better than we did in the last 15 minutes.

“Right now is very disappointed but what we showed was a step forward but it about getting the results, it feels like two points lost and given away.” 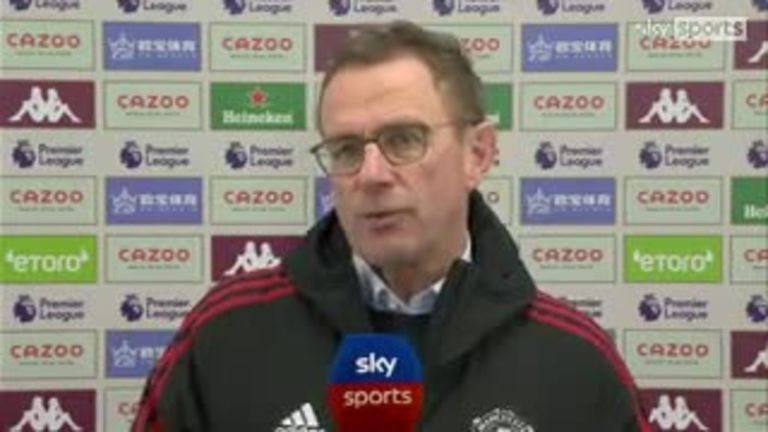 Rangnick was pleased with his team’s first half performance, despite drawing 2-2 with Aston Villa after being 2-0 ahead.

Opta stats: United throw it away

Next up for Aston Villa is a trip to Goodison Park next Saturday to face Everton while United have a rearranged Premier League clash with Brentford on Wednesday before hosting top-four rivals West Ham United on Saturday.